Inflation is the phenomenon that occurs when each unit of money has a reduced buying power. We can think of it in terms of more money chasing fewer goods and services. The Roman Empire famously pioneered coin debasement in the first centuries of the Common Era. The assignat paper currency used in the French Revolution became worthless in less than a decade until its eventual replacement by mandats territoriaux, which had an even harder landing – becoming worthless in less than a year. The Weimar Republic experienced among the most famous and worst cases of hyperinflation in history during the early 1920s as it struggled to repay debts to the winning nations of WWI after the Treaty of Versailles. Many more instances of high inflation have and still happen around the world – from Brazil, to Argentina, to Indonesia, to Zimbabwe, to Venezuela – and always to the great detriment of the society. Meanwhile, the New Zealand government and the RBNZ flirt with doing exactly the same thing – promising it won’t turn out like Venezuela, promising that “this time is different” (to borrow from a popular book title).

“Price stability” is one of the objectives usually listed by central banks around the world – whether by the Federal Reserve Bank in the United States or Reserve Bank of New Zealand (RBNZ). In New Zealand, inflation is targeted to maintain between 1-3 percent per year. One might argue that such an inflation rate is reasonable. But compared to what? According to the RBNZ’s own inflation calculator, from Q1 2009 to Q1 2020 (the same lifespan of bitcoin), against a general basket of goods, the New Zealand dollar has depreciated in value by 16.7%. That is, it would take NZ$1.20 today to purchase what the same quality and quantity of goods could purchase for only NZ$1.00 back in 2009.

One can debate the merits of Keynesian economics, positives and negatives of inflation vs. deflation, and whether high inflation may be justified in times of emergency (as is currently being suggested in New Zealand to pay for the government’s COVID-19 response). But the bigger point we wish to stress here is that for real price stability in the long-term, the move towards algorithmic monetary policy and away from a monetary policy that can be tampered with by humans is highly desirable for ordinary people (however not necessarily for central bankers or politicians). By “algorithmic” we mean that the currency’s supply is subject to limitations, constrained by mathematics and open source software that is verifiable to anyone that can read it – an idea that only had a working proof-of-concept with bitcoin beginning in January 2009.

To be fair, bitcoin clearly has not achieved price stability. In Q4 2017 its price peaked to almost US$20k and is down to (as of the time of this writing) a little more than US$9k. As the currency has not yet reached mass adoption and many of its existing users “HODL”, its price remains highly volatile – as seen in the below image. But if we take into consideration the linear trendline (in green), we notice that despite its volatility, the price of bitcoin, relative to US dollars, has risen substantially in its 11-year history.

The reader can ignore the fact that the green linear trendline in the graph appears to reflect negative prices on the left side of the chart. (Bitcoin’s market price has never been negative). The trendline was generated by Microsoft Excel to show the overall uptick in price over time while ignoring volatility.

Among the most important attributes to bitcoin’s algorithmic monetary policy is its 21 million supply cap combined with its predictable increase in supply. As of the present moment, about 18.4 million of the 21 million maximum total (future) supply have already been added to the monetary supply when they were “mined”. Until the 21 million cap is reached at approximately 2040, miners will continue to receive rewards for successfully mining blocks with an ever-decreasing reward – known as the currency issuance rate. 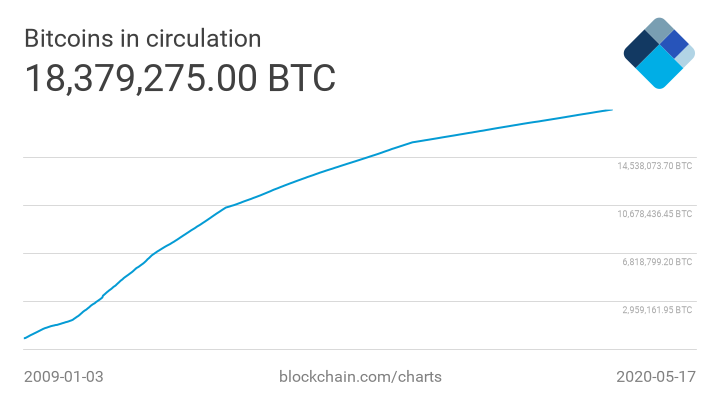 Can we speak of similar technological constraints and predictability of the supply of sovereign (fiat) currencies? Sadly, we cannot. And at least two millenia of economic history show us that human-made institutional constraints on the issuance of money do little to stop coin debasement or running the printing presses as they please – especially in a post-Bretton Woods world. To be fair, bitcoin was also human-made, and its success in constraining the monetary supply will need to endure more than 11 years (its total life so far) before history can judge its success or failure. So to call it a complete success would be, at this point, premature. There will be, no doubt, pressure from some in the community to change the programming code to expand the 21 million cap. We shall see just how well it stands up to such pressures once that time comes. But for now at least, its algorithmic monetary supply (clever use of mathematics and verifiable open source software) appear to have something unique going for it.